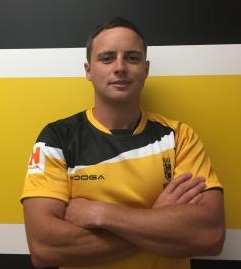 Todays semi final clash against Christchurch will take on even more significant as club pin up boy Scott Davidson will earn his 100th cap.

After a stint down South playing club rugby as a scarfie - Scott returned to the club and has been a main stay of the Division One team since and was an integral member of the championship winning side in 2013. Versatile, reliable and with a hefty boot Scott has had a stellar career with the club and has well and truly earned his place ...on the Pat Long Role of Honour 100 Game board.

In his 99 games before this season, Scott has scored a total of 368 points for Division one since 2013.

Off the field the usually mild mannered and professional young man is well known for his poor dance moves and tone deaf renditions of Elton Johns "Benny and the Jets".

On behalf of the club as well as wishing Scott all the best for tomorrows clash we would also like to wish Scott and his wife Sinead all the best for their upcoming adventure as they embark on international school teaching assignments in Hong Kong. The Karaoke scene in HK will never be the same!

Posted 3 years ago by Wayne Turner